Berserk is one of the most popular manga and anime series in the world. Because of its intriguing and amazing material, as well as its remarkable characters, this series has piqued the interest of readers of all ages. The series, which is set in a dark fantasy world inspired by medieval Europe and focuses on the characters of Guts, a lone mercenary, and Griffith, the head of a mercenary band known as the “Band of the Hawk,” was written and drawn by Kentaro Miura. 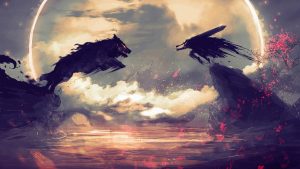 Despite the fact that the new chapter is release broken, Berserk, which was first released in 1988, continues to be a public favorite. As of May 2021, the Berserk manga had sold over 50 million copies worldwide, including digital editions, making it one of the best-selling manga series of all time. Not only impress people with an amazing storyline, with the genius hand of Kentaro Miura, Berserk also stands out of these other mangas by its outstanding fight scenes. And here, we honor to introduce you to the Top 6 Remarkable Fight Scene In Berserk.

Guts and Casca fight to rejoin the Band of the Hawk after falling down the cliff. Both commanders are injured, but the adversary is spying on their location, hoping to kill them while they’re still weak. 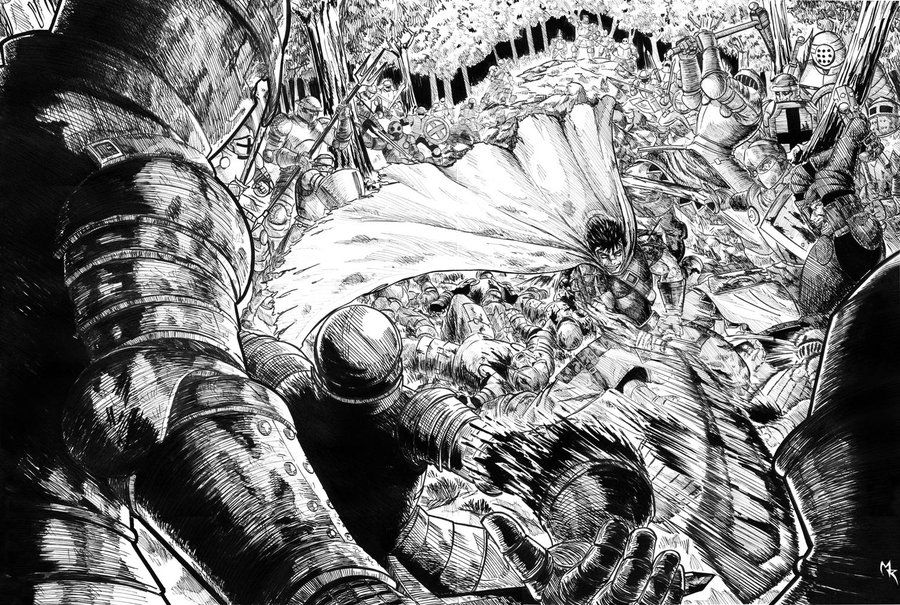 When Adon discovers them, he dispatches a force of one hundred mercenaries to attack. Guts and Casca battle one after the other, slaying their opponents in waves. Casca eventually learns Guts is injuring herself in order to protect her. While he fights the primary host, he lets her make a break for it. Guts is found lying against a tree, bleeding profusely, when she eventually returns with assistance. He is surrounded by a hundred bodies. He’s still breathing, for some reason.

Griffith attempts suicide after being rescued. He fails and bleeds upon the behelit—the gem around Griffith’s neck that Zodd noticed—at which time the universe becomes crimson around him and his fellow Hawks as the Godhand’s demonic pantheon, as well as other lesser demons, emerge before them. 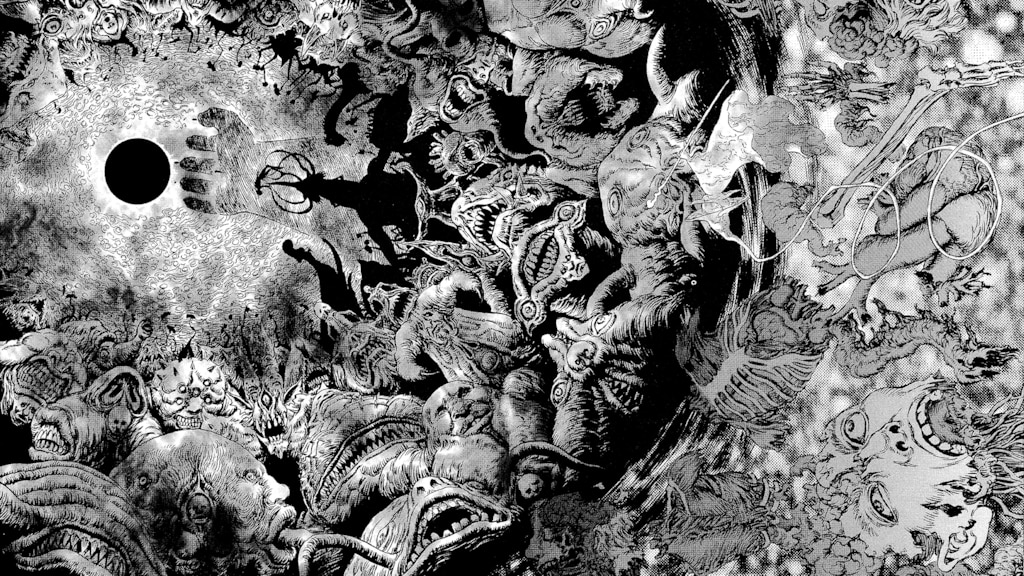 Griffith is told by the Godhand that he may have everything he wants and join their ranks as long as he sacrifices the Band of the Hawk. He concurs. The Hawks are devoured by the demons, who shred them to bleeding sinews. Guts fights for his life with a dagger in his hand. Griffith is converted into a godlike monster at the conclusion, while Guts is transformed into the one-armed, one-eyed demon hunter known as the Black Swordsman after that day.

While the majority of the anime follows the Hawks as they battle for Midland, the opening episode follows Guts as an elderly one-eyed, one-armed demon hunter. The rest of the series is a flashback, detailing how he got to be known as the Black Swordsman in the first place. The battle with Zodd the Immortal is an important element of it. 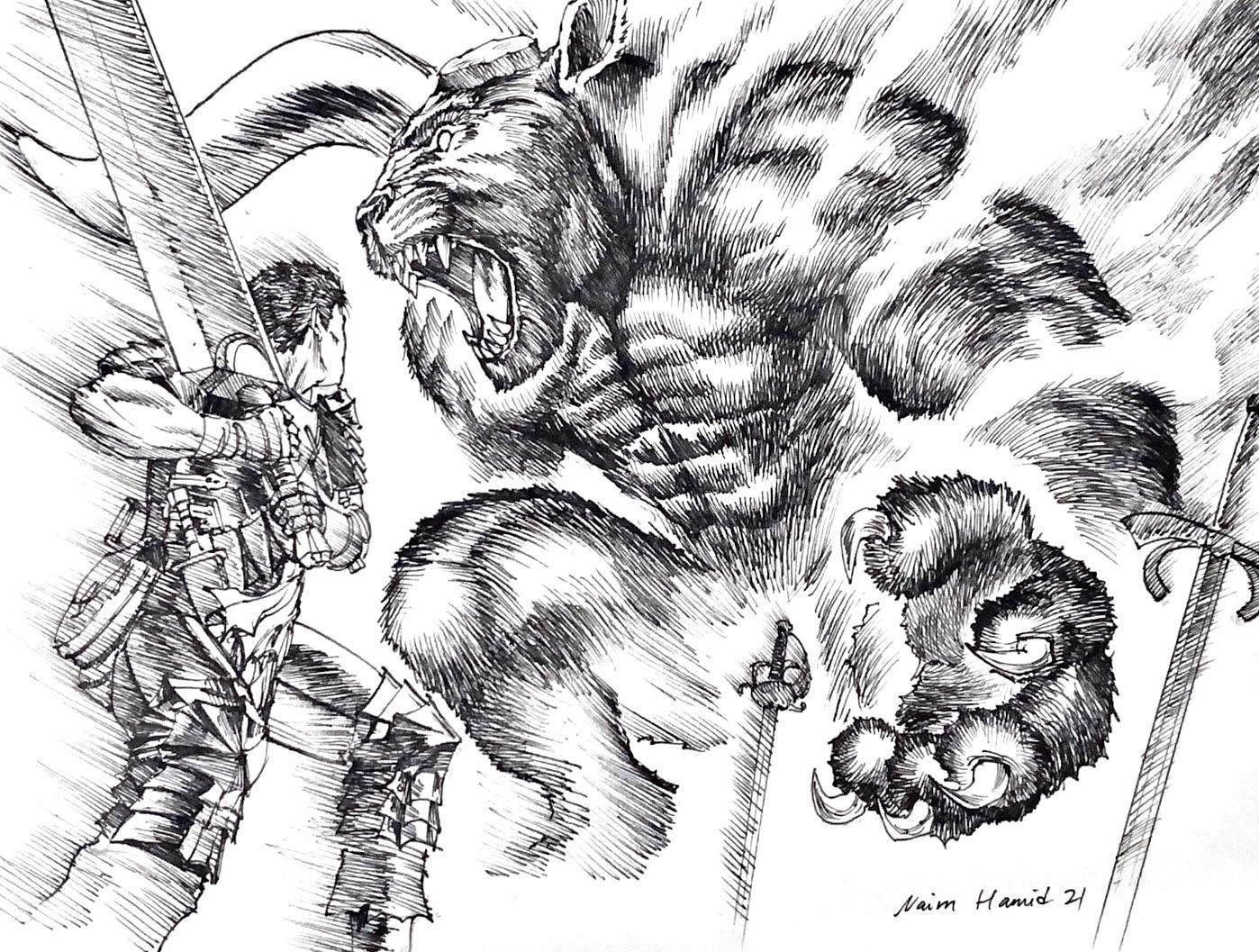 When Guts penetrates an enemy fortress, he discovers Zodd standing among the shattered bodies of fifty dead Hawks. As Zodd flings Guts around the room with ease, he immediately realizes he is vastly outmatched. After breaking Zodd’s blade, Guts finally gets a fortunate blow in. Then Zodd transforms into his actual self. When Griffith steps in, Zodd notices Griffith’s crimson behelit pendant dangling from his neck. When he sees this, he walks away, telling Griffith that one day he will destroy Guts.

4. Battle Over The Cliff

The Hawks fight alongside the other armies of Midland in this enormous cavalry clash. From atop a grassy hill, knights from various groups charge the enemy. The female captain Casca, one of Griffiths’ commanders, fights with a fever. She confronts Adon, an enemy general vanquished by the Hawks at the bridge fort. 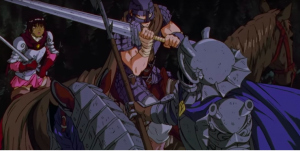 Casca is driven to the precipice by Adon. Her men try to save her, but Adon uses his halberd to slay them. The conflict is raging all over the place. Guts miraculously finds her and saves her just as she is about to pass out from the fever. Adon shoots Guts with a crossbow as he catches her, and the two fall over the cliff into the water below, Guts hanging onto Casca. 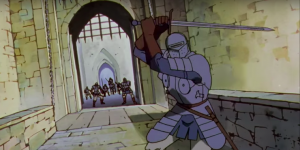 This duel is exclusive to the 1997 anime and is not found in the manga. The studio has developed a number of new sequences to further flesh out the narrative and characters. On the other side of a bridge, there lies an enemy stronghold. Any army attempting to assault must cross this short bridge, which is guarded by a strong gatehouse that fires a barrage of crossbows and cannons in their direction. Griffith displays his military prowess by gathering his troops in front of an enemy fortress while a small group sneaks in via the back. Adon, the villain, also guards the fort, giving him more depth.

Griffith and the Hawks are recognized for their service upon their triumphant return, but Guts is done battling with them. He desires to go off on his own. Years later, Guts returns when he discovers that the Kingdom of Midland is hunting the Band of the Hawk as state enemies. His former pals warn him that Griffith, who is imprisoned in a dungeon, is going to be rescued. 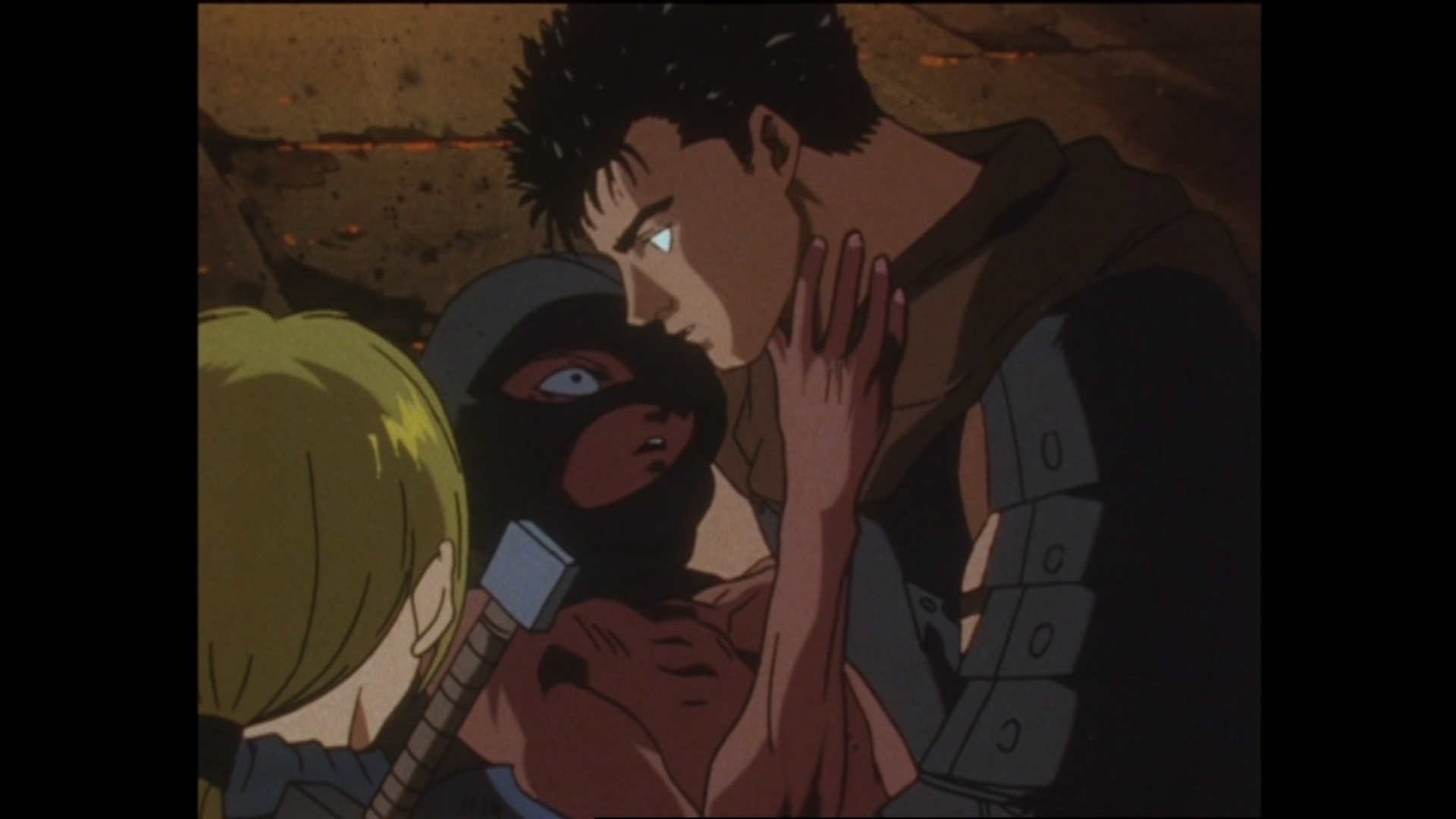 Griffith was deeply saddened by Guts’ departure. In his grief, he seduced the princess, a crime for which he was imprisoned. After years of suffering, Guts and the others discover him to be a shattered, destroyed thing. Guards swarm the Hawks in an attempt to stop them from fleeing. The awareness that no matter what happens, they’ve already lost is what makes this fight so tense.

We have just shown you Top 6 Remarkable Fight Scene In Berserk. With inspiration from this anime/manga, our store provided the newest merchandise that certainly looks trendy, stylish, and fashionable. Get yourself your suitable goods from your favorite manga to express your love for Berserk now!